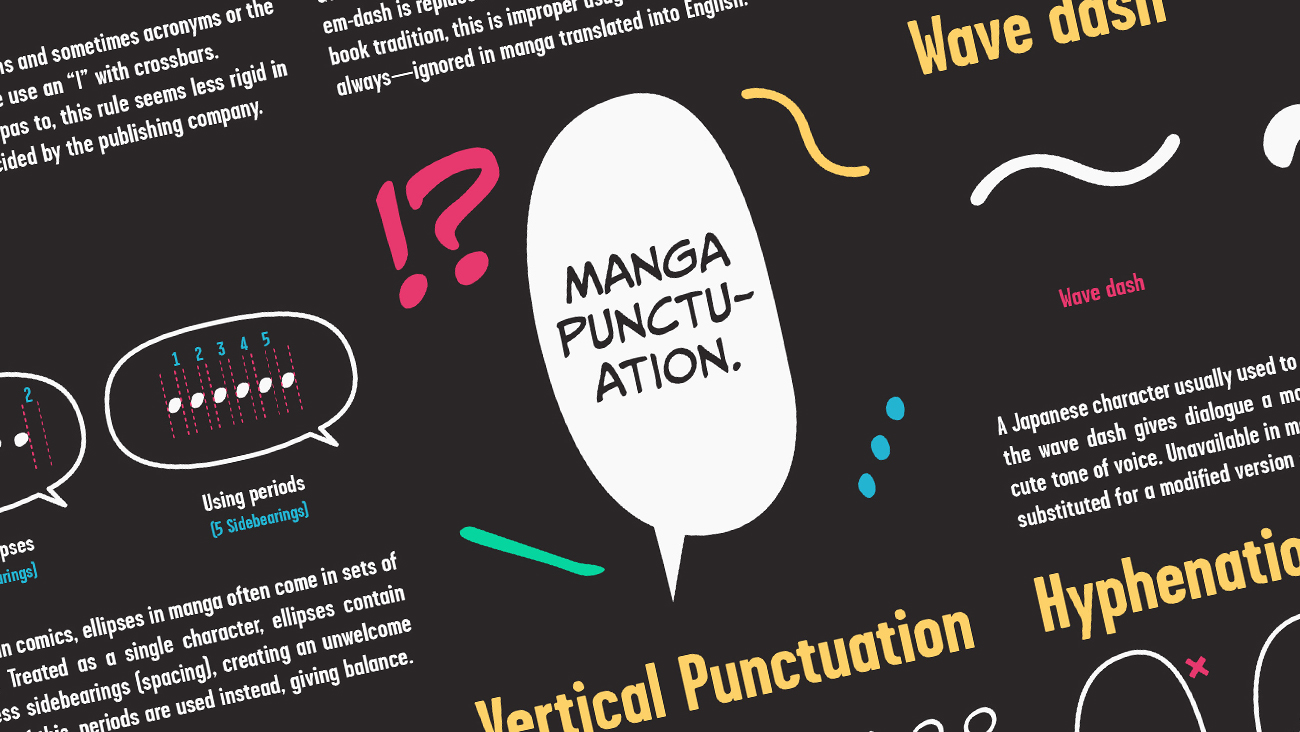 The Basics of Manga Punctuation

In principle, American comics and manga follow a lot of the same rules regarding how lettering should be presented. In the latter, however, there’s not quite as much freedom to do what you want. Balloon shapes can dictate whether size and orientation of dialogue is large or small, horizontal or vertical. Publishing companies will usually decide if you use a crossbar “I”, double dashes and they might even be tell you how ellipses should be handled.

So here’s a short list of some of the punctuation that can sometimes differ from comic tradition in the west.

Traditionally, personal pronouns and sometimes acronyms or the initials of a character’s name use an “I” with crossbars. Although considered a faux pas to ignore, this rule seems less rigid in manga, generally being decided by the publishing company.

While most publishing companies who ignore this rule probably don’t know any better, it’s still worth mentioning that it’s purely aesthetic.

Generally used for interrupted speech, in American comics the em dash is replaced with two hyphens. Although a part of comic book tradition, this is improper usage and a rule often—but not always—ignored in manga translated into English.

The reasons for the double dash seems to come from typewriter days when there was no em dash available.

A non-standard punctuation mark indicating a question expressed in an exclamatory manner. Not often found in fonts, this is usually replaced with ?! or !?. Although open to debate as to which is actually correct, in the west “?!” seems to be preferred.

Unlike American comics, ellipses in manga often come in sets of one or more. Treated as a single character, ellipses contain larger and less sidebearings (spacing), creating an unwelcome gap. Because of this, more often than not periods are used instead, giving balance.

One ellipsis doesn’t tend to cause an issue with most publishers and it might not even be noticeable to the reader but it’s certainly something to be on the lookout for.

A Japanese character usually used to represent range, in manga the wave dash gives dialogue a more drawn-out, wavering or cute tone of voice. Unavailable in most western fonts it is often substituted for a modified version of a tilde (~).

For anybody looking to use this glyph, it’s unicode U301+C.

Sound effects in manga are extremely diverse and artists love to add punctuation. However, because they represent noises and not speech, this punctuation is not actually required and when adapting into English is almost always removed.

The consensus is that sound effects with punctuation appear childish. Of course if this is the result you’re after, then feel free to have fun with it.

Because of the Japanese language being read vertically, there are plenty of times when there’s no choice but to set the type vertically. Surprisingly, punctuation in these situations can have its own set of rules differing from the rest of the dialogue.

In typography !! and ?! are considered single characters and more often than not get placed together, freeing up space. Periods used in place of ellipses are also single characters and thus also get their own line. Lone-periods might require a bit more discretion but it usually comes down to what you or the publishing company prefer.

Although there’s no rule for hyphenating words it’s best to avoid if possible. Hyphenation for anything other than compound words tends to create friction for the reader but if you must hyphenate a long word, do it phonetically try and keep it to one break.

Character and place names in particular should paid close attention to.