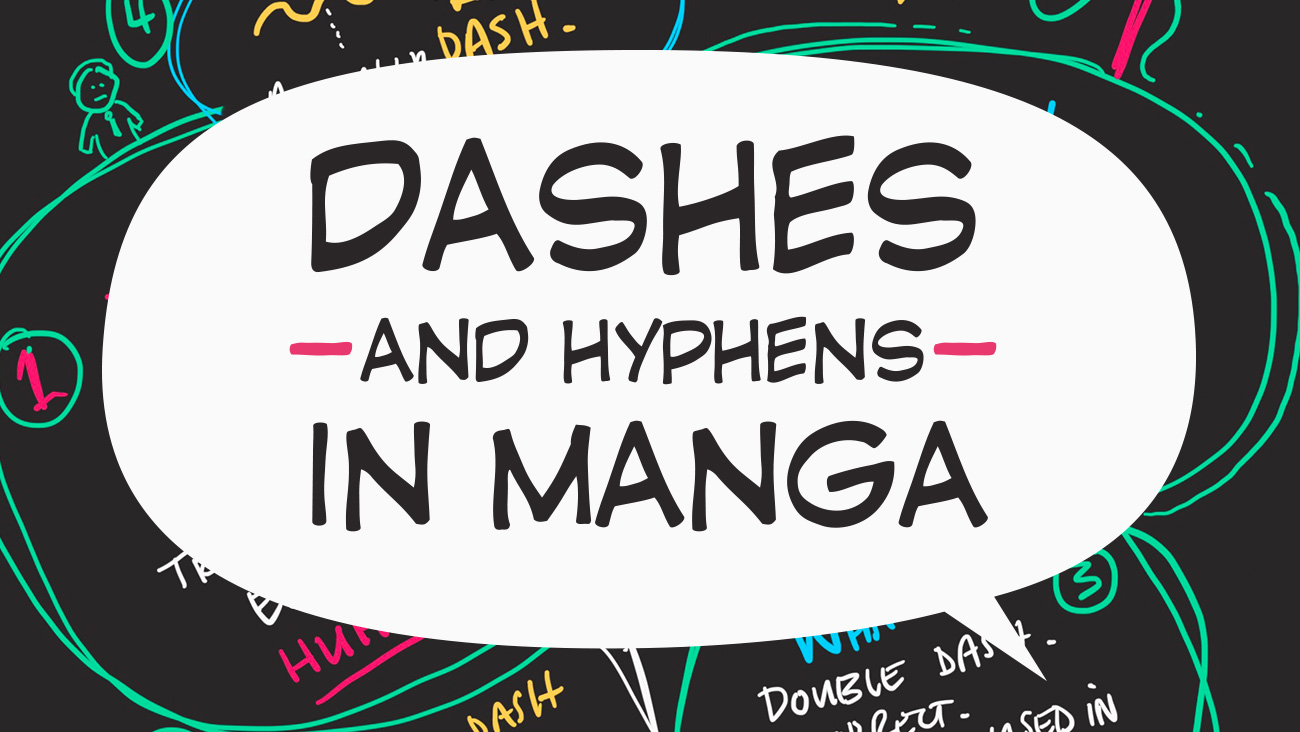 Dashes and Hyphens in Manga

A quick and dirty guide to 8 of the most common hyphens and dashes commonly seen in manga.

A Hyphen is most commonly used to divide words that break at the end of a line or to connect compound words such as Yuuna- san or super-duper. Hyphens are also often used in comics to separate sounds and convey stuttering.

Open to interpretation, the hyphen is typically thicker than the em or en dash and slants upwards.

Em dashes are used to make breaks in dialogue, add short pauses or to insert thoughts into a sentence—just like this one—at either ends of the phrase. Stronger than a comma but slightly weaker than a semicolon or parenthesis.

Although not referring to the letter M, recent em dashes are usually the width of the lowercase m.

The en dash indicates a range of values such as quantity or time. For example, Monday–Friday, 1984–2020 or pages 1–3. Can also be used to indicate contrast or connection between pairs of words, i.e. Tokyo–Osaka agreement.

Longer than a hyphen and approximately half the length of an em dash.

Double em dashes are often used to show the passing of time. Generally used at the beginning of a sentence to represent brooding or contemplation, while phrases ending in a double em dash typically signal interruption.

In addition to the double em dash, triple and quadruple em dashes are also regularly used in manga.

Closely related to the wavy dash, the wave dash is also used to convey emotion. Less dramatic than the em dash, calmer than the wavy dash but more spirited than an ellipsis. Originally used to indicate a range of numbers, in manga it usually signals things such as exhales, moans and groans.

Adding an ellipsis to a em dash functions in very much the same as a double em dash, suggesting an interruption in thought or speech that trails away. Slightly less abrupt than the double em dash and almost always used at the end of a phrase.

Japanese ellipses align vertically with the em dash and are also interchangeable with other punctuation such as ? and !

Double hyphens are a substitute for the em dash, adding breaks, pauses or thoughts into dialogue. Commonly used in American comics, double hyphens come from typewriter days when no dashes were available but are still very much used.

Hyphens and dashes are not the same.

And there you have it: If all those lines and squiggles didn’t make sense before, I hope they do now.

If I missed anything or you have any suggestions for future articles, please feel free to get in touch.